Some call it wisdom, some call it myth, but I tend to want to believe this preposterous lore. Their uses can be as colorful as the gemstones themselves; and, though my original intention wasn't to humor, I confess... I couldn’t contain my laughter while compiling these. Enjoy! 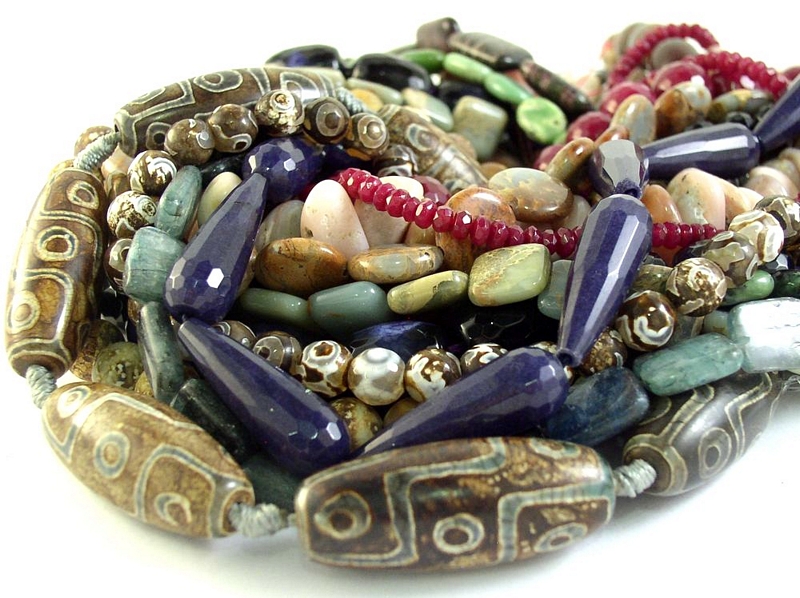 Agate - It is believed that agates hold the secrets of all naughty children.

Amazonite - This stone is useful to activate lazy teenagers!

Amethyst - Keeps you from getting drunk! Probably comes from the fact that its name means “not drunken” in Greek.

Apatite - This is an interesting stone, it’s name in Greek and means ‘to cheat’, but it’s considered by many to be useful in weight loss!

Aquamarine - Known as a sailors best friend because it prevents sea sickness and holds the power to keep a sailor safe at sea. This stone was also treasured by mermaids, which should be no great surprise!

Aventurine - Helps with financial problems. It’s been known to be placed in cash registers to enhance daily income in retail businesses. I wonder if only ‘green’ aventurine has this ability?

Blue Tiger Eye - Legend says, if a dog steps on this stone during her pregnancy one of her pups will be born with a blue eye.

Bronzite - In ancient times wearing this stone gave you the courage of a thousand tigers!

Carnelian - If this stone is placed between just under the arch of the foot it will aid the timid in speaking boldly.

Chrysacolla - Is said to give you the stamina of the Arabian horse galloping across the desert.

Chrysoprase - Wear this stone while swimming to prevent drowning. Another favored by mermaids?

Citrine - Protected against snake venom in ancient days, and carried as part of a first-aid kit of sorts. It will also make the willow weep.

Diamond - Place a diamond in your dishwasher and it will collect all the unwanted grease and grime, making your dishwasher sparkling clean. Good to know, and a great use for all those diamonds which are just laying around!

Epidote - Legend says that you are likely find things that have been lost while wearing epidote. No more lost keys for me!

Fluoroite - Brings order to chaos and often worn my courtroom judges as an anklet. Also known as the ‘home of the rainbow’.

Green Tourmaline - It’s thought to turn witches green, that is why it is now an October birthstone.

Jasper - Makes it rain. Can you imagine?

Jet - Was created from the blackness which fell from the night sky when the stars poked through!

Labradorite - If a woman wears labradorite on her ears, she will never need make-up on her face.

Lapis Lazuli - Creates remembrance and should be worn by all students preparing for a test!

Moonstone - A moonstone hung on a fruit tree was thought to guarantee a great crop of fruit. Romans once thought this gemstone was formed out of moonlight which is where the name originated.

Ocean Jasper - Believed to have come from underwater burial grounds for mermaids.

Opal - Known as ‘Cupid's Stone’ because it reflected the complexion of the Greek god of love.

Prehnite - If you wear prehnite to bed you will remember all your dreams vividly.

Pyrite - If you carry pyrite in the cuff of your pants you will not catch a cold.

Quartz - Carry two of these stones, one clear and one cloudy, and you’ll have the confidence to face the King.

Sapphire - It is thought to help the wearer solve any puzzle and overcome any obstacle.

Snowflake Obsidian - Carry this stone and people will not take advantage of you!

Sodalite - In earlier times sodalite was strung around the necks of alleged murderers to make them admit the truth.

Topaz - Believed by the ancient Greeks to have the power to make its wearer invisible in times of emergency. Why emergency? Sounds suspicious!

Turquoise - Protects the wearer from falling, specifically from horses.

Zircon - Improves humor and was commonly worn by performing jesters back in olden days.

Disclaimer: The contents of this article are intended solely for entertainment purposes. I mean, go ahead and give it a try, but if it doesn’t work don’t blame it on Happy Mango Beads.