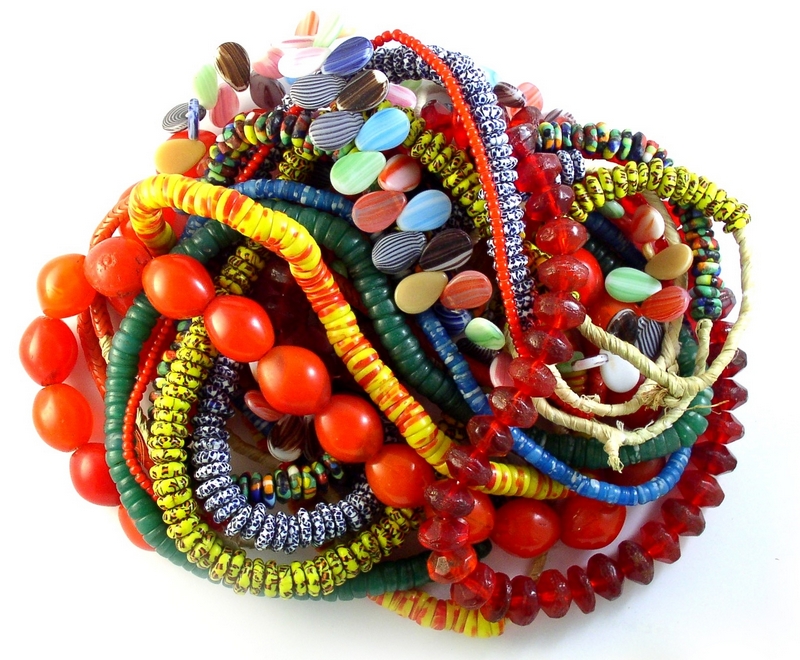 Most of these beads were made between the late 1800s to the 1920s in Europe and traded to Africa, where beads have been used to trade or a form of currency for centuries.  Many of these beads originally came from Venice, with others from Holland and Czechoslovakia.  Others still are produced in Africa, such as many types of sandcast beads.

Amulets are usually worn on the body and are thought to provide protection from evil forces.  Talismans counter a specific evil, may or may not be worn, and may consist of objects bound or collected together.

Made from an aluminum ore which is stained brown by iron.  Sometimes called volcanic ash.

A narrow, irregular shape that twists like a tree branch.  Coral beads are often branch shaped.

A flat backed domed or faceted bead usually glued to a setting or woven into place.

Long drawn tubes or rods of glass, formed by stretching hot molten glass.  Rods are solid and tubes are hollow.  Canes are later cut into different sizes of beads.

Also known as the "cat's eye effect", an optical reflectance in certain gemstones.  It arises either from the fibrous structure of the stone (as in Tiger Eye Agate) or from fibrous cavities within the stone.  This causes a streak of reflected light, similar to the appearance of a cat's eye at night.

Thought to be invented by the Venetians about 500 years ago.  The Italian name is "rosetta", for the pattern in the cross section of the bead, which resembles a flower or many-pointed star.  The colors of the layers in these beads are often blue, white, and red, but many other combinations have been made.  The name chevron refers to the zig-zag pattern that becomes visible when the bead is shaped by grinding.  These beads were also manufactured in Holland in the 17th century by expatriate Venetian bead-makers.

An irregularly shaped bead that is usually smaller and thinner than nugget beads.

Also called raking or dragging.  Glass beads are decorated by stroking a pointed tool across lines of color to form patterns on the surface, usually zig-zags, waves, or scallops.

Derives from the skeletons of marine animals related to anemones and consists of mostly calcium carbonate (like shells).  Two varieties are used to make beads.  Hard stony corals are considered precious and are white, pink, orange, red, or black in color.  Softer horn-like corals have more color variation and can be enhanced by dyeing.  Precious corals are sourced primarily from the Mediterranean and South China Seas; horn-like corals from the Red Sea, the Philippines, and Hawaii.

There are very strict standards set in place regarding the importing of coral into the USA and we are one of over 200 countries that have very tight regulations regarding this.  International law protects endangered and rare coral in all parts of the world.  Many varieties of coral are considered sustainable and in fact grow faster than they are being harvested.  This allows all our coral beads to be imported legally, which we do through a license obtained from the US Department of Fish & Wildlife.  The same applies to our seashell beads.  Bead-making also rarely uses anything but the scraps from other trades using coral and a reef would never be destroyed simply to make beads.

Prior to the practice of glass blowing, beads were made by this process in which a metal rod is covered by a compound that forms the desired shape of the bead perforation.

Made from a mollusk species related to snails.  Used as a form of money and for their symbolic shape in many areas of the world, from early to contemporary times.

Made by the Dogon of West Africa, these beads consist of igneous rocks often made into large bicone shapes.  Also refers to other beads popularly worn by the Dogons, including blue glass beads originally from Europe and large native-made brass beads.

Also spelled Drusy.  Any mineral exhibiting druse, which is a naturally occurring coating of fine crystals on a rock fracture surface or vein, or in cavities inside the rock, such as in geodes.  These crystals vary in size and composition and create a glittering effect.  Druzy is most commonly found in varieties of agate.

Agate beads of unknown age avidly collected in Tibet.  Also spelled dZi, gZi, and tZi.  They are generally brown or black and white with linear and spot patterns, and are usually long tapered bicones or plump barrels.  They are considered by Tibetans to be mystical and sometimes of supernatural origins.

Dating from as early as 2,500 B.C. and featuring linear and dot patterns painted on the surface, which become permanent when fired.  So, technically the term "etched" is somewhat incorrect.  The decorative patterns are usually white, but can also be black, gray, or a combination.  These beads are usually found in India, Pakistan, Afghanistan, Iran, the Himalayas (Dzi beads), and Myanmar (pumtek beads).

Beads of any material decorated with circular patterns resembling human or animal eyes and often desirable for symbolic functions such as averting the evil eye.  These patterns are sometimes naturally occurring, such as in agates and other banded minerals.

Mosaic glass beads that depict human facial images in the cross sections.  These became fairly widespread just prior to the Roman Period.  Faces range from fairly crude depictions to complex images with details such as clothing and jewelry.  More recently, face beads have been made in India and America.

Having small polished cuts on the surface of the bead to create a shimmering effect.

The first synthetic material and the ancestor of glass.  Also known as Egyptian paste.  Like glass, it is composed of silica and alkali and colored by minerals.  Unlike glass, it is a non-homogenous composition, less well-fused, and always opaque.

Also known as White Silver, it is a silver alloy which contains at least 99.9% silver.  It is softer than sterling and much more brittle.

Crushed particles of glass, often colorful, applied to the surface of molten lampwork beads as decoration.

A popular name from the 1960s for Venetian glass millefiori beads, collected by travelers to North Africa.

Town in Israel where crude glass beads have been made for a long time.  They are often basic round of square cylinders and barrels of darkly transparent, but bubbly glass.

Also spelled hishi or heeshee.  This southwestern Native American name refers to beads made my stringing flat drilled pieces and rolling them on or between abrasive stones to form round discs of uniform or graduated diameters.

The appearance of a metallic sheen or rainbow colors on the surface glass.

Glass beads traditionally made by women in Mauritania from recycled powdered glass formed into a paste, then fused by heating in an open fire.  The surface is decorated by applying other colors of the powdered glass paste using a metal needle.

The process of manipulating glass by heating it with a small apparatus, like a Bunsen burner or oil lamp.  The process began in ancient times, but there is little record until it came into use in Venice and other European glass centers.

Ancient beads made of stone, glass, or amber and thought to be shaped like a leech, being flat on the underside, plump in the middle, and tapered on the ends.

A technique for casting metal objects in which a model of the final piece is made in wax, then covered in clay and immersed in plaster or ceramic.  The encasement is heated to melt the wax to remove it, and then molten metal is poured into its place.  Lost-wax casting is a common bead-making process in Africa and other parts of the world.

"A thousand flowers" in Italian.  A mosaic glass made in ancient times and which has numerous sections of often floral patterned canes placed in close proximity to one another, and heated to fuse together.  Modern millefiori glass (late 15th century onward) usually has a separate base to which the canes are fused to.  Also sometimes referred to as Goulimine beads or lace beads.

A method of gauging the hardness of a gemstone or mineral when compared to other stones.  The Mohs scale ranges from 1 to 10, 1 being the softest and 10 being the hardest.

The substance from which pearls are formed.  It is produced by mollusks, coating particles and other foreign objects within the shell case.  Cultured pearls are formed when a small bead is purposefully inserted into the mollusk to start this process.

A somewhat translucent white ceramic, made from kaolin clay and feldspar.  The term comes from the Italian word "porcellana" (translated: little pigs), and refers to the similarity to cowrie shells, called piggy shells in Italy.

Glass, usually recycled, is ground to a fine powder and is then either dry-molded or wet-packed.  Most of these beads are from Ghana, Nigeria, and Mauritania.

Richard and Thomas Prosser invented a machine to accomplish this type of bead molding in 1840.  In this machine, pellets of clay mixed with other ingredients are subjected to pressure and heat, resulting in very uniform beads.  These beads will have seams, but are often hard to see or are tumbled away.

"Squashed" round bead.  Not as thin as a disc.

Glass beads produced in Bohemia in the 19th century, then sent across Russia to China where they were faceted, then sent onward to Alaska and the Northwest North American Coast.  These beads were popularly traded during the fur trade era.

Very small beads that are cut from very thin drawn canes of glass.

Our Stegodon Mammoth bone and tusk beads are made from fossilized remains excavated from the Solo River region of Java, Indonesia and are approximately 1.9 million years old.  Stegodons were a member of the family Elephantidae (of which African and Asian elephants are the only species living today).  Stegodon fossils have been found in a few different countries, including North America, Canada, and Indonesia.

A general term for ceramic wares of crude clay and colored buff, red, or reddish brown.

"Vaseline" glass beads often contain uranium salts, which were used as a colorant.  As a result, they fluoresce under ultraviolet light.  Glass made with uranium salts is widely considered to be safe to work with and wear as jewelry because the process in which they are made essentially traps the uranium inside the glass.

Trade beads that are oblong and pinched on the ends, giving them a watermelon shape.  They come in a variety of striped colors.