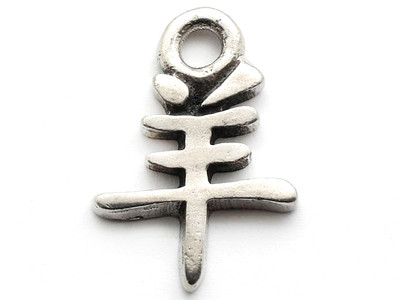 The most creative sign of the Chinese zodiac, those born in the Year of the Sheep (also known as the Year of the Ram or Goat) are often artistic, sensitive, sweet and charming. Shy by nature, Sheep are not the most practical of people and, although well-mannered, they occasionally may suffer from "foot-in-mouth-disease" by saying the wrong thing at the wrong time. Still, with their considerable charm and innocence Sheep never lack for protective friends and admirers. Outwardly dreamy and starry-eyed, Sheep are inwardly anxious, insecure, and usually find day-to-day living difficult and puzzling. As such, they often take refuge in religious, astrology or the occult. Sheep are not overly ambitious, but once they find work that makes use of their considerable talents, they are passionate about what they do. Typically surrounded by beautiful things, Sheep have an ardent love of creature comforts and are almost always elegantly dressed, but can become overly reliant on appearances. Conversely, Sheep people have an innate love of nature and are never happier than when messing about in the garden. In business Sheep tend to be highly disorganized, but they usually enjoy great success as artists, actors, designers, and in many other creative endeavors.