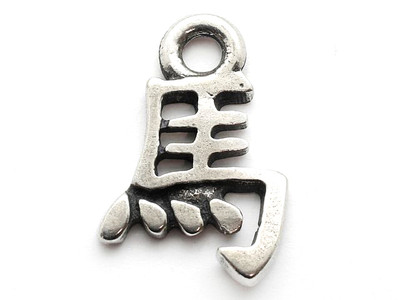 Like tigers with whom they are most compatible, Horse people can be a jumble of contradictions. Cool but hot-blooded, hard-nosed but humble, impatient but extraordinarily tolerant, the Horse is above all defined by hard work and self-reliance. Although Horses work well in groups, they prefer to work by themselves and exhibit extraordinary levels of energy and concentration. They are good with their hands, but can be seen happily losing themselves in accomplishing any given task. In social settings, they are cheerful, charismatic and sometimes overly talkative as they clairvoyantly finish other's sentences in conversation. However, they are also often the first guest to depart, usually due to a feeling of becoming too "penned in". Conversely, Horses are happiest in large crowds in open spaces and enjoy the camaraderie found in pressing the flesh at outdoor gatherings or concerts. In romance, they have a tremendous need for intimacy and belonging. However, once domesticated they often feel pressured in fulfilling family obligations, as they remain at heart powerfully rebellious creatures who will not be made to feel cornered. Travel is a favorite pastime, and horses are known to race off to any far-flung destination at a moment's notice. As such, Horses are well suited to careers as adventurers, poets, travel writers or politicians.